To Mommy or Not to Mommy

A blog about finding a balance between the woman I was before I had a child and the mother I am now.

My parents have often told me stories of my younger self, demanding to do everything myself. ‘Hira khud’ (Hira self) was a very popular phrase in my toddler vocabulary. I would even go shopping with my mum to choose my own clothes. Once, I must’ve been about three, my mother bought a frock for me while she was out shopping alone. Not only did I refuse to wear it, I insisted that she take me back to the store so I can pick something out for myself.

I have carried that independence (and some of that stubbornness) into adulthood. The seemingly unimportant deeds that I was allowed and encouraged to do as a child, no doubt played a major role in carving me into the person I am today. Growing up, I didn’t give much thought to the matter, but now that I am a mother, I understand that the last thing you want to hear when you’re running late is a shrill, ‘myself!’

Baby A wants to do everything herself – from putting on her clothes to flipping pancakes when I’m making breakfast. This morning I had to wait 10 minutes for her to climb into the car seat herself. A couple of times she’s insisted on putting on her diaper herself and I would share with you how that went, but I have successfully blocked the incidents from my mind.

I’ve never been a particularly patient person, and I like to move quickly through my day. Both don’t work with a toddler who wants to do everything herself and doesn’t know how to. What she does know how to do however, is persevere. Children have the perseverance that one rarely sees in adults. They will fail and try again, fail and try again, and then try again the next day. A few weeks ago, when I went to pick Baby A up from nursery, she was insistent that she put on her shoes herself. After what seemed like a few hundred attempts, she relented and let me help her out. In the car on the way home, she was unusually quiet. So, when we stopped at a traffic signal, I turned around to check up on her, only to find that she’d taken off her shoes and was practicing how to put them on. 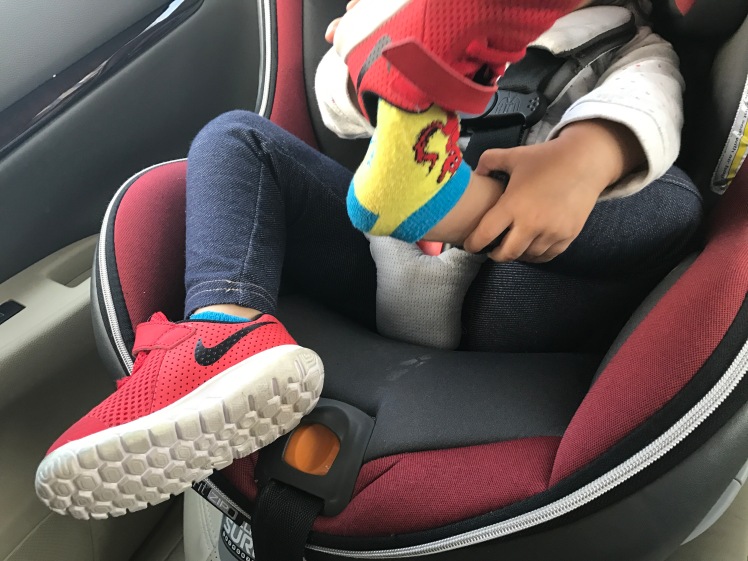 Baby A’s independence and perseverance are qualities that I greatly admire and I pray that she carries them into adulthood with the same fervour. I know that I have a very important part to play in the process. One would imagine that an independent child requires less parenting, but that’s not true. An independent child may require less supervision, but more patience, which is asking quite a bit from an impatient person like me. I often stand twiddling my thumbs as Baby A wriggles around the bed pulling on her pants, refusing help. Putting on one’s pants seems like such an inconsequential act, but for that little human, it’s a momentous achievement. Today it’s something new that she’ll learn to do and tomorrow it’s the confidence she will have in her ability to attempt and conquer new challenges.

Sometimes my confident lion turns into a little lamb, asking me to hold her hand as she gingerly climbs the steps to the slide in the playground. At times like this, my impatience is my strength, because I’m swift to cut the umbilical cord and tell her to get on with it. I still stand by though, telling her that she’s doing a great job and that I’m proud of her, because both are true.

In the early months of Baby A’s life, I thought parenting was simply doing, doing and doing for your child. As Baby A has grown up, I’ve begun to think that it’s not so much what you do for your child or even teach your child, but what you encourage them to learn for themselves that counts.

2 thoughts on “I for Independence”

Follow To Mommy or Not to Mommy on WordPress.com